OpenET will fill a critical information gap in water management in the West. Today, access to accurate, timely satellite-based data on the amount of water used to grow food is fragmented and often expensive, keeping it out of the hands of many farmers and decision-makers. Water supplies in the western U.S. are critical to the health of our communities, food supply and wildlife, but they are facing increasing pressures in the face of population growth and a changing climate.

Applications of OpenET data include: 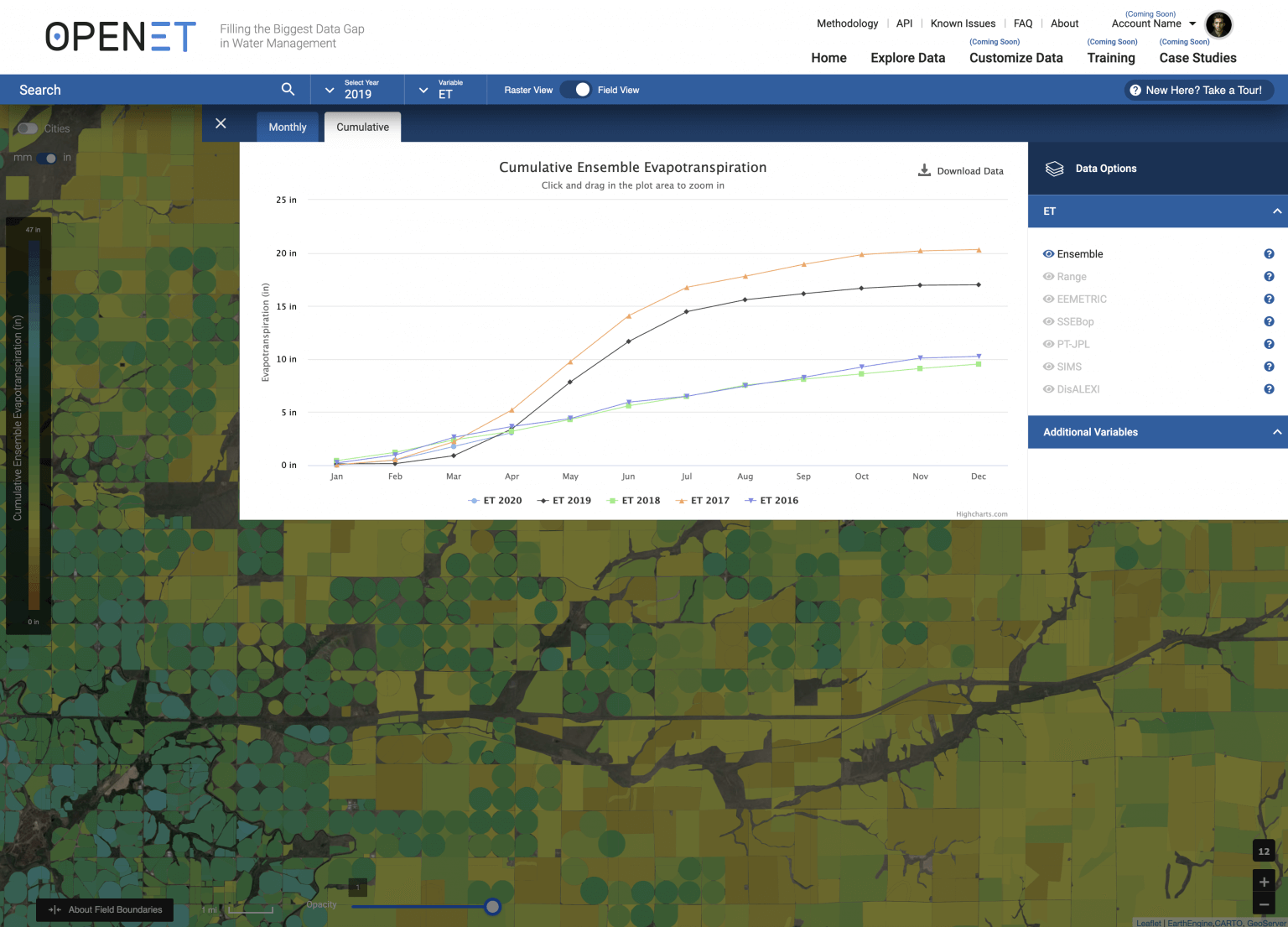 The “ET” in OpenET stands for evapotranspiration — the process by which water evaporates from the land surface and transpires from plants. Evapotranspiration, a key measure of water consumed by crops and vegetation, can be tracked by satellites because the process cools plants and soil down, so irrigated fields appear cooler in satellite images.

OpenET is expected to be available to the public in 2021.

“OpenET will help fill one of the biggest data gaps in water management in the western United States. Our primary goal is to make sure we are providing evapotranspiration data that is accurate, consistent, scientifically based and useful for water management, whether for an individual agricultural field or an entire river basin,” said Forrest Melton, program scientist for the NASA Western Water Applications Office. “OpenET is being created through an innovative collaboration among a national team of scientists, technology experts, farmers, government policy-makers and environmental nonprofits.”

“OpenET is a powerful application of cloud computing that will lead to measurable results on the ground in the agriculture sector. Google is proud to support such an important new tool,” said Google Earth Engine developer advocate Tyler Erickson.

“After 10 years of working with farmers and water agencies to develop ET estimates, it couldn’t be more rewarding to be creating an application like OpenET that uses best available science and makes ET data much more affordable and accessible to all,” said Justin Huntington, a research professor at Desert Research Institute. “We also see OpenET having the potential to scale up to other regions of the world, including South America and Africa.”

“OpenET will empower farmers and water managers across the West to build more accurate water budgets and identify stress, resulting in a more resilient system for agriculture, people and ecosystems,” said Robyn Grimm, senior manager, water information systems, at EDF. “We envision OpenET leveling the playing field by providing all farmers with data that until now have not been widely accessible to everyone.”

OpenET is being developed with input from more than 100 stakeholders across the West.

Providing farmers and local water managers free ET data is a core objective of the OpenET project. For-profit entities and other organizations looking for large-scale access to OpenET data will be able to purchase it through an application programming interface (API). Revenue generated will fund continuing research and development of OpenET data services.

“The Harney Basin is running a groundwater deficit of 120,000 acre-feet to 130,000 acre-feet per year. We have used ET data to gain a better understanding of our water consumption and design more efficient irrigation systems that use about 15% less water. This could translate to a savings of 18% to 20% on electricity costs for pumping, too. With the demands on water from a growing population and feeding more people, we have to figure out how to get the best value from every drop of water. ET data is crucial to providing this information. ”
—Oregon State Rep. Mark Owens. Owens owns or manages 3,200 acres of farmland.

“Reliable water data is almost as critical to farmers and water managers as the water supply itself. With added pressure from population growth and the uncertainty that climate change impacts have on existing and future water supply, OpenET allows planning for agricultural water needs in a way that just wasn’t possible before.”
—E. Joaquin Esquivel, Chair of the California State Water Resources Control Board

“Every five years, the Bureau of Reclamation is tasked with creating a report that summarizes water use and loss for the Upper Colorado River Basin states. Currently, there are several satellite-based methodologies to measure water, many of which will be incorporated into OpenET. Consequently, OpenET will serve as a valuable tool for us to test and compare ET measurement methodologies to determine the best approach for future studies.”
—James Prairie, Hydrologic Engineer, U.S. Department of Interior, Bureau of Reclamation

“OpenET will be a valuable tool to estimate historical and current water consumed by crops across Nevada. OpenET data also will be especially useful for monitoring consumptive use to support local groundwater management plans that are needed in response to long-term groundwater level declines.”
—Adam Sullivan, P.E., Nevada Deputy State Engineer

“To comply with the new groundwater law in California, it’s imperative to have accurate, transparent water use data to serve to build a groundwater budget. But currently ET data can be very expensive to acquire from consultants or universities, and the methodologies are often inconsistent and unclear. Consequently, Rosedale turned to OpenET for accurate parcel-level ET water data at a lower cost to build an online accounting platform for our landowners to more easily manage their own groundwater budgets. Because the OpenET project has brought together a team of leading experts on several approaches for measuring ET, I’m confident it will become the de facto source of water data among landowners and water managers alike.”
—Eric Averett, General Manager, Rosedale-Rio Bravo Water Storage District (California)

“OpenET represents a game-changing leap forward for water management in the West. OpenET will give water users in the Delta a much less expensive alternative method for complying with the state requirement to monitor and report on their water diversions.  Instead of physically measuring every diversion in the Delta, farmers will be able to look up OpenET’s estimate of their crop water use. If the estimate is acceptable to the farmer, the farmer knows that it will be acceptable to us. Concurring on OpenET’s ensemble measurement will save time, money and confusion.”
—Michael George, Delta Watermaster­­­ (California)

“OpenET is a great step forward for managing water needs in a time when demand far surpasses supply. Helping our farmers and ranchers more effectively manage their water use not only helps their crop and bottom line, but creates opportunities for more water to remain in our river systems to benefit both people and nature.”
—Aaron Derwingson, Water Projects Director, Colorado River Program, The Nature Conservancy

The National Aeronautics and Space Administration (nasa.gov) is a U.S. government agency that leads an innovative program of exploration with commercial and international partners to enable human expansion across the solar system and bring new knowledge and opportunities back to Earth. With its fleet of Earth-observing satellites and instruments, NASA uses the vantage point of space to understand and explore our home planet, improve lives and safeguard our future.

The Desert Research Institute (dri.edu) is a recognized world leader in basic and applied interdisciplinary research. Committed to scientific excellence and integrity, DRI faculty, students, and staff have developed scientific knowledge and innovative technologies in research projects around the globe. Since 1959, DRI’s research has advanced scientific knowledge, supported Nevada’s diversifying economy, provided science-based educational opportunities, and informed policymakers, business leaders, and community members. With campuses in Reno and Las Vegas, DRI is one of eight institutions in the Nevada System of Higher Education.

Google Earth Engine (earthengine.google.com) is a geospatial processing platform that combines a multi-petabyte catalog of satellite imagery and other geospatial datasets with planetary-scale analysis capabilities. The platform is enabling scientists, developers and decision-makers to make substantive progress on global environmental and sustainability challenges.