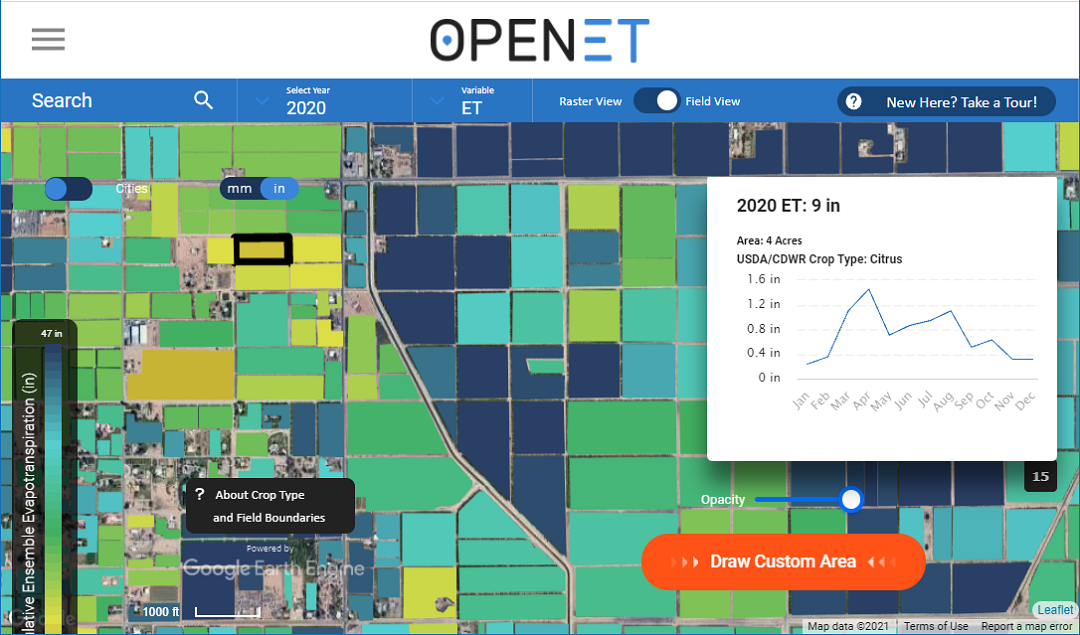 OpenET fills a major information gap in water management in the West. Although water is essential to the health of our communities, wildlife, and food supply, access to accurate, timely data on the amount of water used to grow food has been fragmented and often expensive, keeping it out of the hands of many farmers and decision-makers. OpenET allows users to easily view and download this important water data for the current year and previous five years at no charge.

“OpenET addresses one of the biggest data gaps in water management in the western United States,” said Forrest Melton, program scientist for the NASA Western Water Applications Office. “This easy-to-use online platform provides scientifically robust data that are invaluable for water management at all scales, from an individual agricultural field to an entire river basin.”

“As water supplies become increasingly scarce in arid regions, we need new, innovative tools like OpenET to manage water more precisely and sustainably,” said Robyn Grimm, director, climate resilient water systems, at Environmental Defense Fund (EDF). “OpenET provides all farmers, policymakers and communities big and small with the same high-quality data on water use, so that we can all work together from the same playbook to develop more resilient water supplies across the West.”

“OpenET is a powerful application of cloud computing that will make a measurable impact on the ground in the agriculture sector. Google is proud to support such an important new tool to help improve water sustainability in the western United States as we see the impacts of climate change intensify,” said Google Earth Engine developer advocate Tyler Erickson.

“OpenET combines decades of research with advances in technology from just the past five years to make valuable water data much more affordable and accessible to all,” said Justin Huntington, a research professor at Desert Research Institute. “In the future we hope to expand OpenET to other arid regions of the world, such as South America, India and Africa.”

“As someone who has worked on evapotranspiration for more than 40 years, I am thrilled to see multiple, independent models for estimating ET come together on a single, easy-to-navigate platform,” said Richard Allen, a professor of water resources engineering at the University of Idaho. “By putting these water consumption data into the hands of farmers and water managers across the western United States, OpenET will be transformative in helping us manage water more sustainably,” added Ayse Kilic, a professor at the University of Nebraska-Lincoln.

“In some parts of the arid West, more than 70% of irrigation water ends up as evapotranspiration. By automating calculations for this highly important water data, OpenET will enable the USGS and water managers to more easily create water budgets at the watershed scale, which is an essential first step toward proactive water management,” said Gabriel Senay, a research scientist with the U.S. Geological Survey.

“Irrigated agriculture is essential to feeding a growing population,” said Martha Anderson, a research scientist with the U.S. Department of Agriculture. “OpenET will be a powerful tool to help our nation’s farmers increase food production under conditions of limited freshwater resources.”

“OpenET has not just transformed access to information on ET, but has also facilitated important advances in the underlying science,” said Josh Fisher, a research scientist with the University of California, Los Angeles. “The collaborative approach used to develop OpenET will accelerate our ability to scale the platform to other regions, and to rapidly incorporate new information from future satellite missions.”

“The development of multi-model tools based on cloud computing, as provided by OpenET, is a paradigm shift, allowing water resources management in sustainable ways, not only in the United States, but also in many agricultural regions of the world, where agriculture and irrigation are increasing rapidly, as in Brazil”, added Anderson Ruhoff, a professor at the Universidade Federal do Rio Grande do Sul in Brazil.

Applications of OpenET data include:

The “ET” in OpenET stands for evapotranspiration — the process by which water evaporates from the land surface and transpires, or is released, from plants. ET is a key measure of water consumed by crops and other vegetation that can be used by farmers and water managers to better track water use as well as water saved, for instance, when farmers change crops or invest in new technologies.

Evapotranspiration can be estimated by satellites because the ET process absorbs energy and cools the land surface, and vegetation reflects and absorbs different amounts of visible and near-infrared light depending upon the density and health of the vegetation. These effects are visible to thermal and optical sensors on a satellite. Using sophisticated biophysical models, OpenET combines satellite information with local weather data to accurately estimate ET.

OpenET data has been extensively compared to ground-based measurements collected in agricultural fields and natural landscapes, and tested by a wide variety of organizations through several use cases to ensure the highest accuracy.

OpenET has been developed through an unprecedented public-private collaboration with input from more than 100 farmers, water managers, and other stakeholders. The project is led by Environmental Defense Fund, NASA, Desert Research Institute, and HabitatSeven. Additional team members include Google, U.S. Geological Survey, U.S. Department of Agriculture, California State University Monterey Bay, University of Idaho, University of Maryland, University of Nebraska-Lincoln, University of Wisconsin-Madison, UCLA, and Universidade Federal do Rio Grande do Sul in Brazil.

Providing farmers and local water managers free ET data is a core objective of the OpenET project. For-profit entities and other organizations looking for large-scale access to OpenET data will be able to purchase it through an application programming interface (API) expected to launch in 2022. Revenue generated will fund continuing research and development of OpenET data services.

The National Aeronautics and Space Administration (nasa.gov) is a U.S. government agency that leads an innovative program of exploration with commercial and international partners to enable human expansion across the solar system and bring new knowledge and opportunities back to Earth. With its fleet of Earth-observing satellites and instruments, NASA uses the vantage point of space to understand and explore our home planet, improve lives and safeguard our future.

The Desert Research Institute (dri.edu) is a recognized world leader in basic and applied environmental research. Committed to scientific excellence and integrity, DRI faculty, students who work alongside them, and staff have developed scientific knowledge and innovative technologies in research projects around the globe. Since 1959, DRI’s research has advanced scientific knowledge on topics ranging from humans’ impact on the environment to the environment’s impact on humans. DRI’s impactful science and inspiring solutions support Nevada’s diverse economy, provide science-based educational opportunities, and inform policymakers, business leaders, and community members. With campuses in Las Vegas and Reno, DRI serves as the non-profit research arm of the Nevada System of Higher Education.

Google Earth Engine (earthengine.google.com) is a geospatial processing platform that combines a multi-petabyte catalog of satellite imagery and other geospatial datasets with planetary-scale analysis capabilities. The platform is enabling scientists, developers and decision-makers to make substantive progress on global environmental and sustainability challenges.